Pixelmator Pro is an incredibly powerful, beautiful, and easy to use image editor designed exclusively for Mac.

With a wide range of professional-grade, nondestructive image editing tools, Pixelmator Pro lets you bring out the best in your photos, create gorgeous compositions and designs, draw, paint, apply stunning effects, design beautiful text, and edit images in just about any way you can imagine. And thanks to its intuitive and accessible design, Pixelmator Pro is delightfully easy to use — whether you’re just starting out with image editing or you’re a seasoned pro.

New Interface
• The modern, single-window interface is designed exclusively for working with images on a Mac
• An intuitive and accessible design makes it easy for anyone to edit images — from complete beginners to design professionals

Professional Tools
• Enhance your existing images and create new ones using every image editing tool you could ever need
• Edit nondestructively, adjusting individual changes whenever you like
• Easily move, resize, and arrange objects to create stunning compositions
• Adjust the colors in images with a collection of nondestructive color adjustments
• Enjoy superior support for RAW files, editing RAW images right inside Pixelmator Pro without having to preprocess them
• Create digital or traditional paintings using a collection of handcrafted, fully-customizable, dual-texture brushes with full support for digital graphics tablets
• Combine the built-in effects in Pixelmator Pro to create any artistic or special effects you can imagine
• Nondestructively customize the look of layers in your image using layer styles
• Save the adjustment, effect, and layer style combinations your create, use them in any of your images, and share them with others
• Magically remove small imperfections or entire objects, seamlessly clone parts of your photos, lighten or darken precise areas, and more using a full set of retouching tools
• Use the reshaping tools to easily change the shape of any object or area in your images, create striking artistic effects or make subtle changes to portrait photos
• Pick out and edit precise parts of your images or copy objects from one image to another using a range of pixel-accurate selection tools
• Add high-quality, customizable vector graphics designed by the Pixelmator Team
• Create your own vector graphics using the Pen and Freeform Pen tools
• Easily design great-looking text with a full set of typography tools

Compatibility
• Open and edit images in all the most popular image formats, including JPEG, TIFF, PNG, PSD, PDF, GIF, BMP, TGA, JPG-2000
• Open and edit Photoshop images with layers
• Import HEIF images
• Launch Pixelmator Pro directly from the Photos app and save edits back to the original image in your library
• Share your images to the Photos app, Twitter, Facebook, Flickr, and other locations right from Pixelmator Pro

Built Exclusively for Mac
Designed exclusively for macOS, Pixelmator Pro supports almost every major macOS feature and integrates seamlessly with macOS High Sierra. Simply put, it's the ultimate Mac app. With a design that is totally and completely Mac, Pixelmator Pro feels instantly familiar from the moment you first launch the app.

This update includes a number of performance improvements and bug fixes.

Think you've found a bug? Please let us know by dropping an email to [email protected] and we'll fix it.

END_OF_DOCUMENT_TOKEN_TO_BE_REPLACED

The last version of Photoshop I used was CS4. Quit it when Adobe went to their subscription model. I’ve made do with Apple Photos. Tried Affinity Photo and it was ok. Had decided that I would probably settle on Luminar for what I need to do which, as you’ll see, is somewhat specialized. I was a CorelDraw user before I came over from the Dark Side and got an iMac I used it for graphic design and image handling. Doing layouts with images and text was a snap. I’ve never been able to find anything in the Apple app world to replace it until now. I’m an artist and I need something that will handle not only photographic image adjustments, but also images of paintings and drawings, which can be quite difficult to photograph and adjust accurately. I also need to be able to combine photos, art and text into single pieces for promotional and other work and finally, with Pixelmator Pro, I once again have found something that will do everything CorelDraw did and much more. I read through every feature section on the website, sat down, ran through every icon in the side bar, playing with different settings, brushes, etc. Piece of cake. Very intuitive for me. Looking forward to using is as a “painting media” also. The previous version of Pixelmator had just enough function to drive me crazy trying to get it to do what I want. No more. The Pro version rocks.
Just one request…please make it an extension of Photos asap.

END_OF_DOCUMENT_TOKEN_TO_BE_REPLACED

So I have used older versions of Photoshop and mainly was using Gimp for photo editing. I really like what Pixelmator has here. Good product. I’m happy with it. For basic fixes and enhancements this works. I tested out Affinity and it just wasn’t intuitive. I find the user interface here works for me.

I would make two suggestions to improve: Autosaving bugs me. I find that I mess around with a photo only to find it has saved to my photos. I then have to go in and revert to original. Big issue when I’m working on something I’ve already altered. Becuase this takes me too far back past other edits. I work around this by only messing with duplicated photos. And secondly I would like to see more auto filters in future updates.

END_OF_DOCUMENT_TOKEN_TO_BE_REPLACED

I’ve been using Pixelmator for years, since it was the Mac package to make GIMP easier for the end user. I have always kept other image/photo editing apps - just in case - until they moved everyone to subscription model. With Pixelmator Pro I don’t miss them at all. The migration from plain old vanilla Pixelmator is not always obvious at first, but just using your Mac-sense seems to nearly always produce an expected result. Then a little playing around begins to reveal an application that is much more intuitively organized, full of sweet new treats, and good at reducing key strokes and mouse clicks. Very happy!

END_OF_DOCUMENT_TOKEN_TO_BE_REPLACED 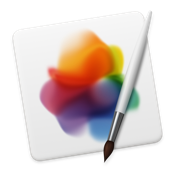