Beyond Band of Brothers

“Tells the tales left untold by Stephen Ambrose, whose Band of Brothers was the inspiration for the HBO miniseries….laced with Winters’s soldierly exaltations of pride in his comrades’ bravery.”—Publishers Weekly

They were called Easy Company—but their mission was never easy. Immortalized as the Band of Brothers, they suffered 150% casualties while liberating Europe—an unparalleled record of bravery under fire. Winner of the Distinguished Service Cross, Dick Winters was their legendary commander. This is his story—told in his own words for the first time.

On D-Day, Winters assumed leadership of the Band of Brothers when its commander was killed and led them through the Battle of the Bulge and into Germany—by which time each member had been wounded. Based on Winters’s wartime diary, Beyond Band of Brothers also includes his comrades’ untold stories. Virtually none of this material appeared in Stephen Ambrose’s Band of Brothers. Neither a protest against nor a glamorization of war, this is a moving memoir by the man who earned the love and respect of the men of Easy Company—and who is a hero to new generations worldwide.

END_OF_DOCUMENT_TOKEN_TO_BE_REPLACED

Digital edition does not contain photos that are part of print edition. Excellent book/reading. Gave it two stars for missing photos

Biggest respect for this generation

Thank you! That is all I can say. I have so much respect for the military, especially the generation of my grandfather. I feel by reading ww1 & 2 books, I feel like the values, integrity and bravery are shouting at me. It feels like my granddad is reading captain winters' words to me. I'm 33, and I know that I will likely never be able to ever live up to what these men did during the war. Thank you gentlemen! May your legacy live on forever in my heart!! 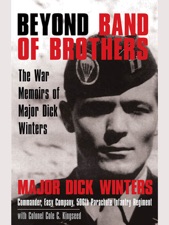