Ladies' Night is a non-stop rollercoaster ride of sheer nerve rattling terror, previously deemed too violent for mass market publication. In this modern tale of the ages-old battle of the sexes carried to the extreme, Jack Ketchum again provides readers with an excursion into horror as relentless as a John Woo film.

Tom Braun and his wife Susan aren't exactly a picturesque couple. Thus it comes as no surprise that Tom continually spends late evenings in bars and cheats on his wife. Unfortunately, their son Andy is caught in the middle of his parent's childish banter and family chaos. One life-altering evening turns this family's, along with most of New York's, perceptions on the nuclear family and male/female relationships upside down.

When a tanker trunk with "Ladies Inc." emblazoned on the side crashes in a quiet area in New York, an area it doesn't have authorization to be in, it liberally spills its contents all over the road and into the surrounding atmosphere. The local authorities deem the contents of the spill to be safe, based merely on the assumption that products coming from a women's label are more than likely benign. Moreover, the smell emanating from the spill is one of sweet cherry, similar to lollipops, which must of course be harmless if not favorable. This aforementioned assumption proves fatally incorrect. The chemical load the truck was hauling procures a discomfiting, bestial effect in women, forcing them to savagely attack males in their vicinity. Be they former friend or foe.

Tom, while at a local bar, absorbs the evening's strange turn of events with traumatizing clarity as he witnesses first hand the metamorphosis of surrounding women into gruesomely instinctual brutes and mantis-like predators. He must get home to his son Andy, who is currently alone with his wife Susan. Hopefully before it is too late.

END_OF_DOCUMENT_TOKEN_TO_BE_REPLACED

This book was fantastic, full of action and horror. It kept me wanting to read more. The ending was okay, it was super predictable, a bit of a let down. But the road to the end was awesome. 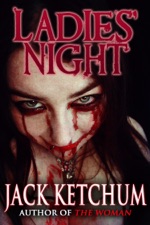