Life’s tough for Dexter Morgan. It’s not easy being the world’s only serial killer with a conscience, especially when you work for the Miami police. To avoid suspicion, Dexter’s had to slip deep into his disguise: spending time with his girlfriend and her kids, slowly becoming the world’s first serial killing couch potato.

Then a particularly nasty psychopath starts cutting a trail through Miami — a killer whose twisted techniques leave even Dexter speechless. When his sister Deborah, a tough-as-nails cop, is drawn into the case, it becomes clear that Dexter will have to do come out of hiding and hunt the monster down. Unless, of course, the killer finds him first. . .

END_OF_DOCUMENT_TOKEN_TO_BE_REPLACED

lol. I loved this book, it was definitely a page turner. I've seen all five seasons of the showtime series and I was afraid I'd get bored with the story but it's completely different. For a big Dexter fan like myself it's like finding the lost episodes or something. lol. The main monster in this book is really bad so be prepared. lol

Book itself is great - but get the paper one. There were countless rendering problems, pages jumping around randomly, once I saw two different chapter beginnings on facing pages. 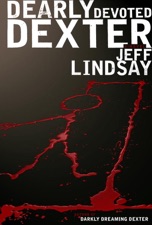