Compressor integrates tightly with Final Cut Pro to add power and flexibility to your video conversions. A simple interface lets you quickly customize output settings, enhance images, and package your film for sale on the iTunes Store. For even faster conversions, easily set up distributed encoding using other Mac computers.

Support for Industry Standards
• Encode to a broad range of industry standard formats including MPEG-4, H.264, MXF and ProRes
• Work with a choice of themed menus to encode and burn a DVD or Blu-ray disc
• Generate files for HTTP live streaming in a single step
• Import Targa, DPX, TIFF, PSD, PNG or OpenEXR image sequences and encode them to any setting
• Tap into advanced encoding features for adding closed captioning, metadata, and more

Pristine Format Conversions
• Convert any file between formats — such as NTSC to PAL, SD to HD or progressive to interlaced video
• Import and manipulate wide color video, then deliver in standard Rec. 601 and Rec. 709 color spaces or in wide Rec. 2020 color space
• Deliver High Dynamic Range (HDR) video with controls for color space conversions and HDR metadata
• Deliver HDR video as P3 D65 PQ, Rec. 2020 PQ, and Rec. 2020 HLG
• Use CABAC entropy multipass H.264 encoding for superior results with hardware-accelerated export on supported systems
• Clean up and customize your content using image filters, a timecode overlay, and watermarks
• Speed up video, slow it down, or adjust the frame rate to make the duration match a runtime

HEVC
• Encode video in the High Efficiency Video Coding format (HEVC, also known as H.265) for file sizes up to 40 percent smaller than H.264 while preserving the same visual quality*
• Create a custom HEVC export setting in Compressor and use it in Final Cut Pro
• Send Final Cut Pro and Motion projects to Compressor to encode video in the HEVC format
• Create a self-contained HEVC droplet for drag-and-drop encoding on the desktop

END_OF_DOCUMENT_TOKEN_TO_BE_REPLACED

A Great Piece of Software!

Apple offers some pretty amazing software, but Compressor is by far one of the most under rated programs out there. If you ever needed to convert Audio files to different formats, or convert video from stand definition to high definition look no further. Compressor can do a lot, and I highly recommend taking a look at Compressor’s User Guide to take full advantage of it’s capabilities! The best part is once you pay for it the software is yours, and it does not require a montly fee for use like Adobe Media Encoder.

END_OF_DOCUMENT_TOKEN_TO_BE_REPLACED

Ever since the 10.4 FCPX update, everything I send through compressor errors. Junk software at the moment.

Thankful it hasn’t been killed

I’ve used compressor for years and years now. Really wish it had a few features that pros actually use and need. Add LUTs to process dalies, ability to add multiple image sequences at once, drg and drop Image Sequences, ability to add a raw image sequence, add a basic LUT color change, and export to proxies and 422, ability to set a default frame rate instead trying to always render every single sequence into 29.97 or manually change it… 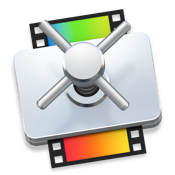