An Artist in Treason

For almost two decades, through the War of 1812, James Wilkinson was the senior general in the United States Army. Amazingly, he was also Agent 13 in the Spanish secret service at a time when Spain's empire dominated North America. Wilkinson's audacious career as a double agent is all the more remarkable because it was an open secret, circulated regularly in newspapers and pamphlets. His saga illuminates just how fragile and vulnerable the young republic was: No fewer than our first four presidents turned a blind eye to his treachery and gambled that the mercurial general would never betray the army itself and use it too overthrow the nascent union-a faith that was ultimately rewarded.

END_OF_DOCUMENT_TOKEN_TO_BE_REPLACED 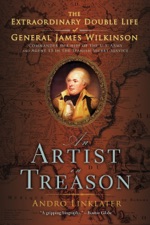