The Men Who United the States

Simon Winchester, the acclaimed New York Times bestselling author of Atlantic and The Professor and the Madman, delivers his first book about America: a fascinating popular history that illuminates the men who toiled fearlessly to discover, connect, and bond the citizenry and geography of the U.S.A. from its beginnings.

How did America become “one nation, indivisible”? What unified a growing number of disparate states into the modern country we recognize today? To answer these questions, Winchester follows in the footsteps of America’s most essential explorers, thinkers, and innovators, such as Lewis and Clark and the leaders of the Great Surveys; the builders of the first transcontinental telegraph and the powerful civil engineer behind the Interstate Highway System. He treks vast swaths of territory, from Pittsburgh to Portland, Rochester to San Francisco, Seattle to Anchorage, introducing the fascinating people who played a pivotal role in creating today’s United States.

Throughout, he ponders whether the historic work of uniting the States has succeeded, and to what degree. Featuring 32 illustrations throughout the text, The Men Who United the States is a fresh look at the way in which the most powerful nation on earth came together.

END_OF_DOCUMENT_TOKEN_TO_BE_REPLACED

A very biased rewriting of history

I am a American history buff who purchased this book before it was released and eagerly jumped into it when I was released. I have never been so disappointed in a supposed history book. It was actually a chore to finish it.

The reason, the book is laced with the authors very biased opinions and he bends history to support his preconceived conclusions, often in a totally blatant manner. His premise is that it is government that made America what it is and the obscure people he digs up have one common character, they are government people. The explorers and entrepreneurs who actually made things happen are pretty much insignificant. In fact, the entrepreneurs were all pretty much robber barrons.

The only purpose of his relating his current day visits to historical places is to push his anti development Luddite theories.

He also has the very annoying habit of judging the decisions of pioneering developments by consequences decades later, with 100% hindsight and much more advanced scientific knowledge, than judging them by the knowledge of the times these bold adventurers were executed.

A very disappointing book that I would not recommend.

END_OF_DOCUMENT_TOKEN_TO_BE_REPLACED

A wonderful look at American history

This is a fantastic and unique look at some lesser known characters—explorers, thinkers, etc.-- in American history. The book was particularly interesting to me because the focus was on the building of this country, from the highway system to the telegraph. It’s broken into sections using the five classical elements (wood, earth, water, fire, and metal). Winchester became an American citizen recently, and I thought he brought a fresh perspective; plus, he’s a great writer. I would recommend to anyone looking for a new take on our country’s history.

END_OF_DOCUMENT_TOKEN_TO_BE_REPLACED 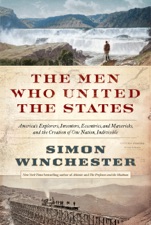