One book. Two readers. A world of mystery, menace, and desire.

A young woman picks up a book left behind by a stranger. Inside it are his margin notes, which reveal a reader entranced by the story and by its mysterious author. She responds with notes of her own, leaving the book for the stranger, and so begins an unlikely conversation that plunges them both into the unknown.

The book: Ship of Theseus, the final novel by a prolific but enigmatic writer named V.M. Straka, in which a man with no past is shanghaied onto a strange ship with a monstrous crew and launched onto a disorienting and perilous journey.

The writer: Straka, the incendiary and secretive subject of one of the world's greatest mysteries, a revolutionary about whom the world knows nothing apart from the words he wrote and the rumors that swirl around him.

The readers: Jennifer and Eric, a college senior and a disgraced grad student, both facing crucial decisions about who they are, who they might become, and how much they're willing to trust another person with their passions, hurts, and fears.

S., conceived by filmmaker J. J. Abrams and written by award-winning novelist Doug Dorst, is the chronicle of two readers finding each other in the margins of a book and enmeshing themselves in a deadly struggle between forces they don't understand, and it is also Abrams and Dorst's love letter to the written word.

END_OF_DOCUMENT_TOKEN_TO_BE_REPLACED 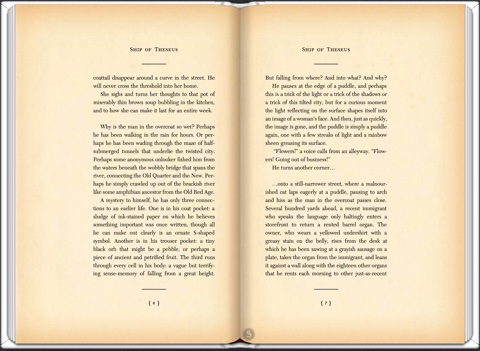 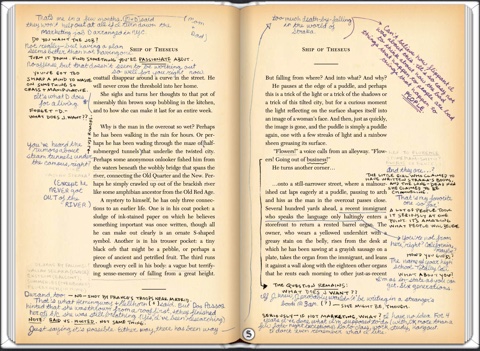 What a horrible ebook. Stay away from the digital version of this book. It read like a PDF. Clearly, this was converted into digital for to try to milk the market but J.J. Himself clearly states on the first page that this was meant to be read in physical, book form. Before buying this from iTunes I highly recommend downloading the sample. You will save yourself a lot of frustration. Do yourself a flavor, just bite the bullet and jump in the car and buy the book.

I'm the biggest fan of my Kindle, but this is a book that MUST be experienced through the physical medium of a book. It feels like an old library book in your hands, the writing looks real, add-ons fall out of the pages adding to the mystery, and it even has a musty old-book smell.

I gave it a 5-star rating because it is one of the msot exciting books I have ever read. But the fact that it's even offered as a digital download is a disgrace to the whole point of it in the first place. Do yourself a favor: take a break from your e-reader and dive back into an actual book. JJ Abram's "S." is no better place to do so.

END_OF_DOCUMENT_TOKEN_TO_BE_REPLACED

Get thee to a bookstore!

S. is best experienced in the long forgotten traditional way of story consumption. Bounded paper, covered in ink, with symbols used to communicate thought. I do believe they call it a book. The paper book has a long history of being despised. Ferhenheit 451, The Book Theif…Viva! distopian societies. However it’s spiral to extinction started about eight years into the second Earth millennium.

Seriously. Buy the book. I love my electro-gadgets, but not for this book.

It is between the pages of the tactile version that one can truly appreciate the work that has gone into the making of this adventure. No one has made carrying a book around this popular since J.K.Rowling. (Note: S. is not children’s lit.) This book begs to be held, searched, and at times rummaged through. The reader must refrain from peeking at the 20+ inserts, and is forced to make the crucial decision of who’s story to read first, or shift from one to the other.

S. is very much a part of J.J. Abrams and Doug Durst. Fun, exciting, mysterious creative, and smart. They are The Twilight Zone of the 21 century.

No one should tell what happens beyond the cover of this book. Get a copy. Find a quiet corner. Hang up a "Do Not Disturb" sign. Prepare to be immersed and lost in a real (or surreal) book.